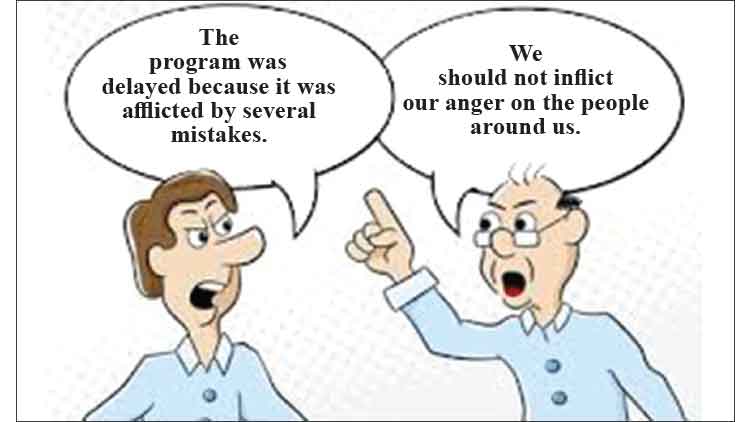 Meaning as a verb

Example : His younger brother is afflicted by Typhoid.

We should help the poor people afflicted by this unusually cold weather.

The program was delayed because it was afflicted by several mistakes.

The sudden price hike of the daily necessaries afflicted the cost of living of the people of our country.

The country is afflicted by different socio-economical problems with the increase in population.

This particular disease afflicts children more than the adults.

Inflation afflicts the economy of a country.

The sudden rise in the cost of electricity afflicted the cost of living of the people of the country.

Meaning as a verb

Example : Our freedom fighters inflicted a serious defeat on the Pakistani Army in 1971.

The dacoits inflicted brutal injuries on the victims.

Why are you inflicting your negative thoughts on me?

We should not inflict our own beliefs on others.

Many degenerated western culture are inflicted on our culture because of globalization.

We should not inflict our anger on the people around us.

He has a bad habit of inflicting his own belief on others.

Rihan was trying to inflict the whole blame on Saira.

Many people have a bad habit of inflicting their own faults on others.